Jennifer Anderson teaches her class the moves for the song “Do You Love Me?” by The Contours. The class meets Tuesdays and Thursdays in the gymnasium at Halverson Elementary School. –Tiffany Krupke/Albert Lea Tribune

When the students walk into the gymnasium of Ms. Anderson’s after-school dance club, there is excitement in the air.

They run through the doors, tossing their backpacks to the side of the gymnasium, eager to get started.

Each week, members of the Halverson Elementary Dance Club meet on Tuesdays and Thursdays to learn a new dance.

“I like it because it’s fun and we have fun dances and Ms. Anderson is our teacher and she’s really nice,” said Halverson Elementary student Rahea Lunaclay.

Jennifer Anderson taught this course to two groups of students, each for approximately six weeks. The dance club is open to students in grades three through five. Each day begins with warm-ups before students start learning a new dance. 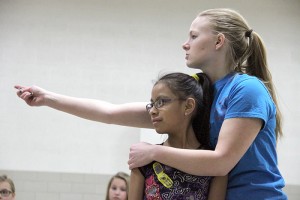 First grade teacher Jennifer Anderson helps a student line up during dance practice. The dance club ends each day by performing in front of students and parents.

And the cost of each course package? Only six dollars, which are used to pay for a t-shirt to decorate the recital and the cost of bus transport.

Anderson is a first grade teacher at Halverson with a love of dancing and teaching.

Anderson usually chooses songs she knows and talks to her students for feedback.

“I’m thinking of teaching them ‘What does the fox say?’ because they love this song,” Anderson said. “I’m already thinking about movements in my head.”

When Anderson first announced she was opening the club, 50 students were interested. Anderson divided the students into two sessions; the first session featured a holiday show in January.

Two of the songs they performed were “Let it Snow” and “Firework” by Katie Perry.

Anderson’s passion for dancing is what led her to start the after-school club.

Anderson, a Winona State graduate, has been dancing for 19 years now. She teaches dance part-time in Rochester, including a tap class.

“It’s really good that these kids have the opportunity to learn and be active,” Anderson said. She is also happy that the class is affordable.

The current session for fourth and fifth graders in the class has been delayed by school cancellations. 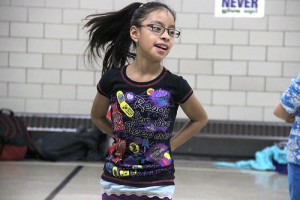 A student jumps to the beat of the music during the Danish club. The class learns a new dance with each practice.

“It was so difficult because school kept getting canceled,” Anderson said. “Kids would come up to me and say ‘Noooooo!’ because they were going straight home instead of going to class.

Anderson is surprised by the popularity of the class and thinks it would only interest a few students.

Still, it’s hard not to notice the smiles on the students’ faces as they danced their way through “Do You Love Me?” by The Contours and “Hey Brother” by Avicii.

Most of the students are beginners, Johnson said, although some have previous experience. She says she enjoyed seeing the students come out of their shells.

“I like that we do different dances,” said Alexis Talamantes, a student in the dance class. 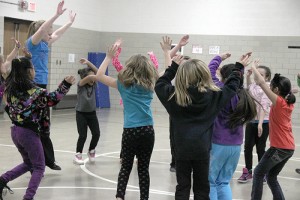 The class jumps to warm up before learning a new dance. The class will perform in February.

Tuesday’s class ended with the class performing the dance in front of a group of after-school students and some of their parents.

The students finished with a curtsey before heading out for the day.

Johnson hopes to continue her course after school next year.

“I love dancing myself,” Johnson said. “I’m so happy to be able to share it with them.”

Johnson’s said the dance club will be performing in about a month. Students will host a party to make shirts, posters, and programs for the event.

“It’s a great way for them to get active and learn a new skill,” Johnson said. “I love to dance. I would be so sad if I had to stop.

The Permian Basin Dance Club is back and better than ever

The club meets every Thursday evening from 7:30 p.m. to 9:45 p.m. at the American Legion in Odessa. ODESSA, Texas – The Permian Basin Dance Club is back and better than ever after its COVID-19 break. “Most of the club was in the high risk category so we had to close very quickly,” club chairman […]

Last Thursday, the Carnegie Building’s Root Room was the site of an open band and menagerie of spirited folk dancers. After its hiatus due to COVID-19, the Contra Dance Club welcomed the community to its first dance of the year. The contra dance, often referred to as the New England folk dance, is easy to […]